With Halloween drawing near, Bugis Junction & Bugis+ are daring shoppers to face their fears with an immersive virtual reality (VR) gaming experience. 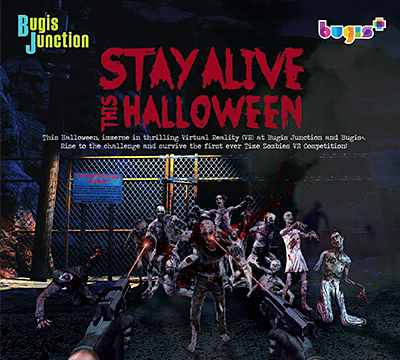 We were invited to try out the VR games for this competition at Bugis+ & Bugis Junction in Singapore – it was great fun!

This is the first time a mall in Singapore is hosting a VR experience of this scale.

Three thrilling games are available for shoppers to test their courage: Time Zombies, Walk the Plank and Arizona Sunshine Zombie.

The Time Zombies competition uses the latest Arctic Fox wireless technology, which allows a fully immersive gaming experience without the the burden of cumbersome cables or backpack computers that hinder physical movement. 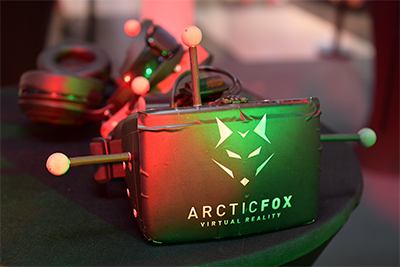 The VR gaming showcase at Bugis Junction and Bugis+ this Halloween will mark Arctic Fox’s debut in Southeast Asia, to the delight of VR gaming enthusiasts in the region.

More details from the press release below.

The thrilling Time Zombies VR competition will take place at Bugis+ Atrium, Level 2, from 13 to 29 October.

To take part in the Time Zombies VR Competition, shoppers can either present a receipt with a minimum spend of S$20 in a single receipt at either Bugis Junction or Bugis+, or redeem one game play with 100 STAR$ via the CapitaStar app. 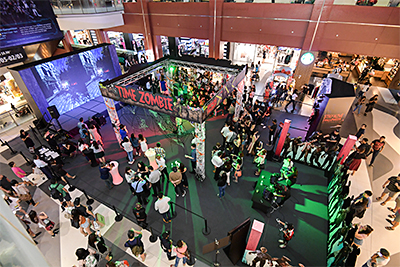 The Arctic Fox VR technology allows the player free movement within a 5 metre x 5 metre physical space. Eight infrared cameras mounted on a truss keep track of the headsets and gameplay pistol positions in 3D where the player’s entire body becomes the controller for the game.

Shoppers are invited to step into the shoes of detectives travelling through time hot on the heels of Dr Virago, a time-travelling mad scientist, and stop him in his bid to spark off a zombie apocalypse.

Faced with a frenzied gang of flesh-eating zombies coming at them from all angles determined to tear them to bits, shoppers are challenged to stay calm and aim for consecutive headshots that will exponentially increase their scores.

The immersive VR simulation is so realistic this player must be having the most frightening Halloween scare she has ever tried!

They can also look out for floating power ups to help in their fight against the flesh-eating living dead.

Qualifying rounds will take place between 13 to 26 October from 11am to 9pm daily.

Thereafter, scores will be tabulated and the top 10 individual players will be selected on 26 October at 9pm.

The competition will culminate in a final showdown among the top 10 players on 29 October from 2pm to 6pm.

Exciting prizes await the top 10 players, which include:

In addition to the top 10 prizes, daily rewards await shoppers when they participate in the Time Zombies VR competition.

They stand to receive STAR$ when they achieve a minimum game score of 1,000 points, which will be awarded daily after tabulating the day’s game scores.

Note: Every 5,000 STAR$ accumulated can be used to redeem S$5 CapitaVouchers.

From 6 to 15 October, shoppers can challenge their fear of heights with an exhilarating plank walk 50 storeys above ground while dodging creepy crawlies flying at them with a game of Walk the Plank.

The Arizona Sunshine Zombie game, available from 13 to 29 October, will challenge players to brave the blistering heat and scour the Arizona desert for fellow survivors of the zombie apocalypse.

Do you DARE?! This is what you see and battle against – in immersive 3D, as if the zombie is right in front of you!

To take part in these games, simply head to the VR booth at Bugis Junction in front of Hotel Intercontinental with a minimum spend of S$20 in a single receipt at either Bugis Junction or Bugis+.

Alternatively, shoppers can redeem one game play with 100 STAR$ via the CapitaStar app.